The program will begin with the Four Small Concert Pieces, op. 21 composed by American-violinist composer Cecil Burleigh (1885-1980) and published in 1914.  Among his well-known teachers was Felix Borowski (1972-1956), a piano and violin teacher, composer, newspaper critic and director of Chicago Musical College from 1896 till 1925. Burleigh taught violin, theory and composition at the University of Wisconsin-Madison from 1921-1955. He earlier taught is Morningside College in Sioux City, Iowa (1911-14), where he was a predecessor of Leo Kucinski (1904-1998), Tyrone's violin teacher. Kucinski was born in Poland and studied in Warsaw Conservatory before coming to the USA as an already accomplished musician (1918). 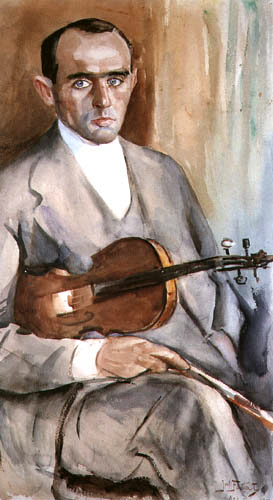 The Greive/Keller duo will also perform Flight, a piece written and published by Polish violin virtuoso and composer Paul Kochański (1887-1934) in 1928. Based in the USA since 1922, Kochański was one of Poland’s most important and accomplished violinists.  He also strongly influenced and collaborated in the writing of violin works by the eminent Polish composer Karol Szymanowski as well as Prokofiev, Stravinsky, Bartók, de Falla and many others.

Flight is dedicated to Charles Lindbergh (1902-1974), the first person to make solo a nonstop transatlantic flight in May 1927. Three months later, a crowd of about 40,000 gave this former student of the UW-Madison College of Engineering a thunderous welcome and inspired by his success, city leaders voted to purchase land needed for the municipal airport in October 1927.  In summer 1928, Lindbergh returned to Madison to accept a honorary doctorate from UW-Madison. 2018 marks the 90th anniversary of this event and the arrival of Paul Kochanski's composition.