As part of their first USA tour, the Atom String Quartet will perform a mix of their own compositions, folk music inspired tunes, Polish jazz classics by jazz violinist Zbigniew Seifert as well as pieces by classical composers, Witold Lutoslawski and Krzysztof Penderecki. 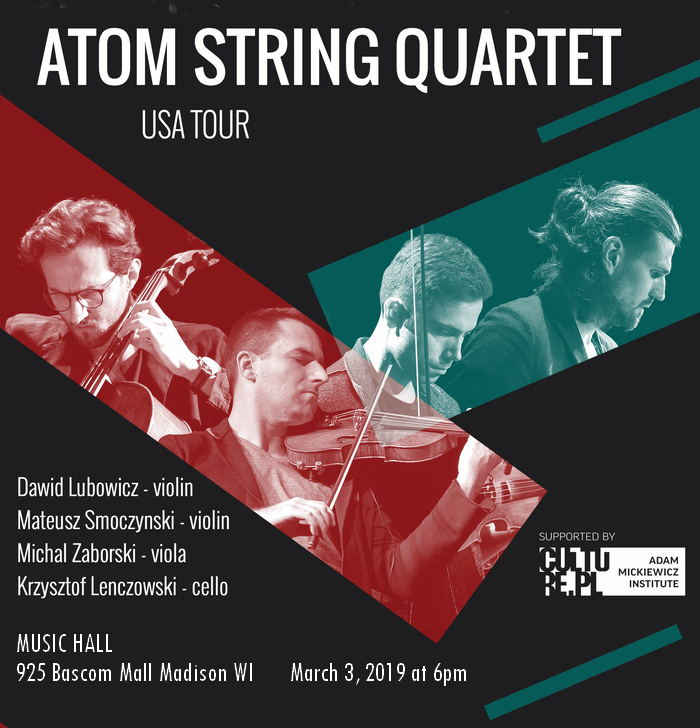 Admission is free but donations are welcomed

From the UW School of Music website:  Atom String Quartet is one of the most intriguing string quartets in the world, and also one of best Polish jazz bands.

The group combines the capabilities of a string quartet (i.e. two violins, viola and cello) with improvisation in its broad sense. The set of instruments of a chamber music ensemble, which is most classic and firmly established in music tradition, enables the artists to search for new sound and formal achievements. It is difficult to define, in an explicit way, the music style of the group. Its music output, besides jazz, shows sources of inspiration coming from Polish folk, music of various regions of the world, and also contemporary and classical music.

The quartet was established in Warsaw in 2010, and is created by the violinists: Dawid Lubowicz and Mateusz Smoczyński, the violist – Michał Zaborski and cellist – Krzysztof Lenczowski. All of them graduated from Warsaw Frederic Chopin University of Music.

The group recorded four original records: “Fade In” – which received the Polish music award “Fryderyk” for Jazz Debut of the Year (2011), “Places” (2012) – which got “Fryderyk” for Album of the Year – Jazz (2012) and “AtomSPHERE”, which was nominated to “Fryderyk” for Jazz Album of the Year (2015). All records were released by Kayax. In 2017 the band released its fourth album containing compositions of the renowned Polish jazz violinist – Zbigniew Seifert with interpretations of the quartet’s musicians. Zbigniew Seifert Foundation is the publisher of the album. The album was nominated to “Fryderyk 2017” for Jazz Album of the Year. That year also other two CDs were released, in which the quartet took part: a mutual record of Zakopower and Atom String Quartet and “Made in Poland” recorded with Leopoldinum Orchestra, which presents compositions of Karol Szymanowski, Grażyna Bacewicz and Henryk Mikołaj Górecki, as well as Krzysztof Lenczowski (“Iława” and “Namysłowiak”) and Dawid Lubowicz (“Ballad on the Death of Janosik”). The CD was awarded “Fryderyk 2017” for Album of the Year Symphonic and Concert Music. The band’s discography also contains significant live concert albums with special projects, i.e.: Leszek Możdżer and Friends “Live in Berlin Philharmonic III”, Grzech Piotrowski World Orchestra “Live in Gdańsk”, String Big Band “Live in Trójka”, and Dorota Miśkiewicz “Piano.pl”.

The musicians of Atom String Quartet are constantly invited to other artists’ recording sessions, e.g. Zakopower (“Drugie pół”), Kayah (“Transoriental Orchestra” and “Gdy pada śnieg”), Natalia Kukulska (“Ósmy plan”), Cezariusz Gadzina (“The Fifth Element”), Rafał Grząka (“Atom Accordion Quintet”), Grażyna Auguścik (“Inspired by Lutosławski”), Tomasz Wendt (“Behind The Strings”). In 2017 two recordings of the band have been released: one is a joint project of Zakopower and Atom String Quartet, and the other – “Made in Poland” recorded with Leopoldinum Orchestra, containing works of Karol Szymanowski, Grażyna Bacewicz, Mikołaj Górecki together with Krzysztof Lenczowski’s “Iława” and “Namysłowiak”, and Dawid Lubowicz’s “Ballada o śmierci Janosika” (“Ballad on the Death of Janosik”).

In 2017/2018 season Atom String Quartet was the artist-in-residence in Mieczysław Karłowicz Philharmonic in Szczecin.

This concert is a part of their first US tour and part of the 3rd Edition of the Chicago's "Chopin IN the City" Festival. The festival is organized by Sound and Notes Foundation and aims at presenting Poland's most interesting contemporary musicians as well as Polish music performed by foreign musicians.